It’s World Diabetes Day and full marks to Google for acknowledging the day with the image above for all to see when using their platform today! It would  have been the 125th birthday of Frederick Banting who, with colleagues J.J.R. MacLeod and Charles Best at the Canadian University of Toronto, identified a way to extract insulin in 1922 from the pancreata (plural of pancreas!) of pigs and cows to treat type 1 diabetes. Click here for extra facts about Banting’s life. 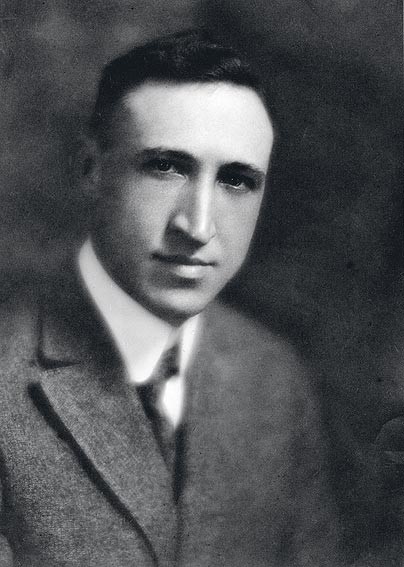 ulin post discovery? Professor Thornburn Railsford Robertson secured a licence from the University of Toronto to replicate and then enhance the work of Banting et al. in the University of Adelaide’s Darling Building in 1923.

Robertson had been Professor of Biochemistry at the University of Toronto and within a year of the publication of the discovery of insulin Robertson wrote from Adelaide to MacLeod, a colleague during his time in Toronto, receiving a licence from Toronto’s Insulin Committee to prepare insulin. He was able to replicate the Banting et al. process, initially supplying ½ a unit of rabbit insulin for the treatment of a six year old boy with ‘very severe diabetes’ (type 1 diabetes) in the Adelaide Children’s Hospital in January 1923.

Robertson continued his research, increasing the yield of insulin harvested from beef pancreata in the University of Adelaide’s Darling Building laboratory – that still exists today. Commercial quantities of insulin were soon possible so that more people could access this life saving medication. He worked with the Metropolitan Abattoirs’ Board to access the pancreata from the abattoir on North Terrace – where the new Royal Adelaide Hospital and SAMHRI building sits today – and managed to perfect a technique to cost-effectively extract commercial quantities of insulin.

In a letter dated 11th December, 1923 (below) Robertson wrote to the Council of The University of Adelaide of his concern that production had increased to 500 units of insulin per pound of beef pancreata without a decrease in the cost of insulin to the consumer. An increasing profit was achieved, a breach of the original insulin production licence from the University of Toronto. 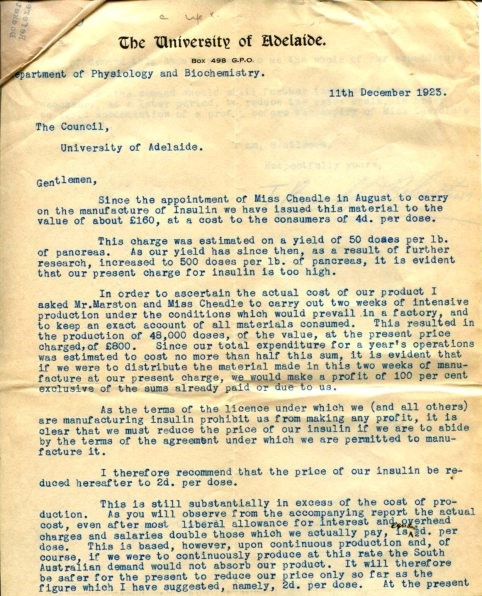 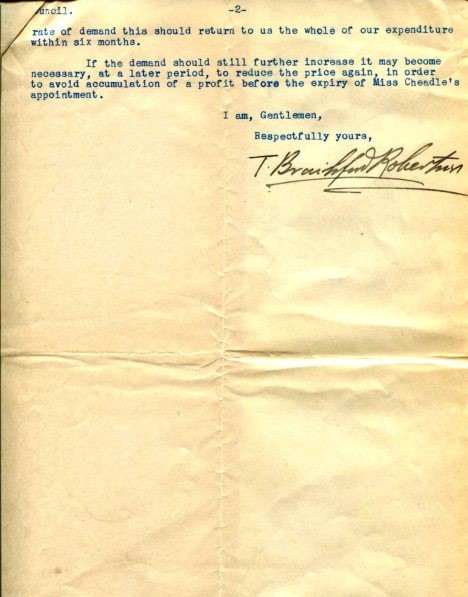 Robertson initially produced 50 insulin doses from a pound of animal pancreata in 1924. Once he perfected the extraction of insulin to a quantity that ensured access to all self-supporting people the Commonwealth Serum Laboratory and Eli Lilly took over the venture.

Sadly, Robertson died at the age of 45 years from influenza and subsequent pneumonia. He had published 170 papers, textbooks and even children’s story books. You can read Robertson’s obituary here.

Today this beautiful stained glass window overlooks the rear stairway of the University’s Mitchell Building as a permanent reminder of Robertson’s work.

The Adelaide University researched and curated an exhibition on Prof. Thornburn Railsford Robertson’s life. It was displayed for a short period of time in 2012 but has not been re-displayed since. Few in the diabetes world would have seen the exhibition and it would be wonderful to see it re-displayed in an appropriate collection.

This World Diabetes Day let’s also celebrate Robertson’s achievements alongside of those of Banting. I can only imagine Robertson making his way down an un-bituminised North Terrace in horse and buggy in 1923 to collect beef and pork pancreata for his research. Could he have imagined the impact that work would have in bringing this life-giving treatment to the world? Their foundation work has and will be extended by many past, present and future medical researchers continuing the quest to cure type 1 diabetes. Happy World Diabetes Day!

(The above is derived from a number of sources, including The University of Adelaide 1874-1974 by W. G. K. Duncan and Roger Ashley Leonard, the entry for Robertson in the Australian Dictionary of Biography written by G. E. Rogers, and an obituary published in the journal Biochem in 1930.)