Health professionals depend on written and spoken words to help people with diabetes to manage their diabetes; they inform, support, comfort, reassure and inspire. However, words can also have a negative impact on people and create a barrier.

Are the words you using sending an unintended message to people with diabetes?

A while back, I read that nurses in northern NSW had been banned from using terms such as ‘mate’ and ‘darling’ after people living in an aged care facility complained because they found the term offensive. More than likely the nurses didn’t mean to be offensive, but the words they were using were interpreted as offensive by some people. People can interpret the same word differently.

The term ‘diabetic’ is well known to cause many people with diabetes offence. It has largely been eliminated from written and verbal communications by diabetes health professionals however it continues in many other health publications and brochures.

What are some of the other words people with diabetes prefer we don’t use?

Let’s consider the frequently used sentence, “Are you testing your blood glucose levels?”

The word ‘testing’ is most likely to cause an issue. Many people feel we are testing their self care when we talk about testing blood glucose levels. It can trigger a sense of success or failure especially if the results are discussed as being ‘good’ or ‘bad’. Using the word ‘check’, ‘monitor’, ‘self-monitoring’ or diabetes numbers  encourages a positive and empowered reaction.

Getting communication back on track 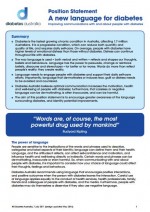 To get you started check out the following tips:

Think about the words you use with people with diabetes. Are you using words like ‘test’, ‘compliance’ and ‘complications’? All of these words are problematic for their negative feel:

Compliance is a problem because people feel they have to ‘comply’ with the directions of the health professional – it becomes a power play where a health professional says ‘do this’ and the person is expected to do it!. Instead it should be a two-way approach as you both identify the best way for each individual to achieve recommendations. This approach is much more likely to succeed as well!

The word complications is also problematic – it sounds like the health problems associated with diabetes will happen no matter what an individual does to care for their condition.

Once the words you want to stop using have been identified, practice using the new words. Tell you colleagues what you are doing and ask if they will tell you if they hear you using the old terms. You are likely to also influence their use of these words as well. Once you have made the change you will probably start to notice a more positive relationship with the people you support.