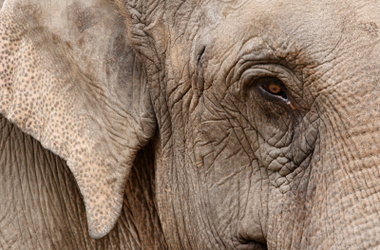 CDEs receive one referral per 1000 GP consults despite GPs dedicating 4.2 appointments per 100 to diabetes care. Jayne Lehmann RN CDE explores if CDEs are the elephant in the room when it comes to achieving improved long term glycaemic targets in people with type 2 diabetes.

Some 20-25 years ago responsibility for type 2 diabetes care moved from acute care diabetes teams back to primary care and became the domain of general practitioners (GPs), nurses and allied health professionals working outside of the hospital system.

GP skill development was supported by some of the acute care services during the transition period of the early 1990’s. Mentorships were developed between Endocrinologists and GPs to provide three months of clinical experience in the weekly hospital-based diabetes clinics. Here they learnt, apprentice like, from endocrinologists the more advanced diabetes care practices including initiation and titration of insulin and complication screening. Each GP had their own list of patients and gained feedback from the endocrinologist during the session. They also joined the diabetes team for their weekly meeting and sat in on sessions with each of the other allied health professionals broadening their skills further.

These doctors gained an appreciation of the team approach to diabetes care. Each member had enhanced their skill-sets to manage the basics of each other’s specialty for consistent reinforcement of messages. Once these GPs returned to their general practices they continue d to refer their patients back to the CDE/DEs and other team members because of the value they had seen added with their input. Their diabetes team was not in the same building but we were connected via referral pathways, letters, phone calls and mutual respect.

Fast forward to 2016 and diabetes skills education is presented to larger groups of GPs outside of clinical settings. A merry band of GPs with advanced diabetes care and insulin management skills provide interactive sessions to their peers as they travel the length and breadth of the country. Gone are clinical sessions with real patients, now replaced with case studies and discussion. There is a necessary increased focus on the ever increasing range of 1st, 2nd and 3rd line medication options as well as the non-insulin injectables and insulin initiation/titration. There is now scant time left to focus on the role of multi-disciplinary team care and the role they play in quality diabetes management systems.

GPs have been able to refer their patients to Credentialled Diabetes Educators (CDEs) since the introduction of the Chronic Disease Management Program by Medicare in 2004. Given all this focus on primary diabetes care surely the waiting rooms of CDEs are humming with a steady stream of GP referrals?  Not so. The majority of private practice CDEs at the 2015 ADEA Private Practice meeting and those I’ve talked to since have indicated their clinical capacity could be increased if only they received more GP referrals. CDEs registered to provide Medicare services are struggling because of this under-utilisation with some closing due to a lack of use.

The Bettering the Evaluation and Care of Health (BEACH) data for 2013-14 reports diabetes educators as the ninth most common allied health professional to whom GPs refer – making up 0.7% of all GP referrals. Let’s put that into perspective. For every 100 GP encounters, a referral to a diabetes educator is made 0.1 times or 1 referral every 1000 GP encounters.[1] Considering diabetes (non-gestational) was identified in this same dataset as 7.2% of the total chronic problems GPs treated over the time period, equal to 4.2 per 100 consultations[2], this confirms patterns of GP referral to CDEs are extremely low.

Is the low referral rate by GPs to CDEs partly to blame for only half of people with type 2 diabetes achieving their longer term glycaemic (HbA1c) targets?

Deed et. al. published pre and post evaluation data from 220 participants in two of the 2013 RACGP accredited diabetes care and insulin management education programs for GPs.[3] The programs focussed on starting people with diabetes on insulin and the impact of this on participant attitudes and behaviour was evaluated pre and post program. The translation of knowledge into practice was also evaluated with a 3 month post session questionnaire, returned by 48 of the 220 participants (21.8%).

The authors reported 87% of the 48 respondents started at least one person on insulin in the three months after the education program, compared with 47.5% of the 220 participants before the education. (Refer Figure 3 below[4]) The low response rate, is likely to include a sample bias as the doctors who had been able to use their knowledge to start someone on insulin were likely to have been more motivated responders. 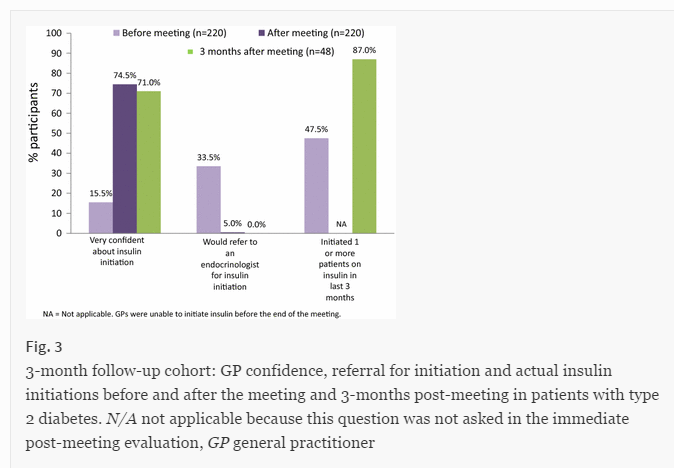 Respondent confidence levels dropped slightly when it came to putting the information into practice, even in this motivated group of doctors. Confidence levels are likely to have dropped further if a higher more representative response rate had been achieved.

A poll by Medical Observer and 6 Minutes in August this year confirmed a lack of confidence by GPs in the commencement and titration of insulin in type 2 diabetes management. Despite 84% of GPs indicating it is the GPs role, only 25% indicated they were comfortable with insulin therapy. This is likely to go some way to explaining the clinical inertia seen in primary care when people with diabetes are left with long periods of hyperglycaemia due to a lack of action by their clinicians which contributes to not achieving glycaemic targets.

I wonder … is the lack of GP referral to CDEs the elephant in the room when it comes to getting more people with type 2 diabetes to reach their long term glycaemic targets?

Why don’t GPs refer to CDEs?

There are certainly issues related to the Chronic Disease Management program, which provides a Medicare reimbursement of $52.95 for five allied health referrals each year to assist people with diabetes in their chronic disease management. GPs often tell me they can’t refer to a diabetes educator because people want to use all five referrals to see the podiatrist. I don’t think the aim was for this program to provide what has essentially become a toenail cutting service for some, unless of course the individual has high risk feet. Many people with diabetes are then blocked from accessing members of the broader diabetes team, including CDEs.

If GPs take a proactive approach to care planning and team care arrangements by explaining why they feel the person will benefit from seeing a CDE, it is likely they will accept broader referrals.

The RACGP Diabetes Management Guidelines (18th Edition)[5] haven’t helped. GPs are provided with a checklist of diabetes care requirements and the corresponding health professional/s responsible for providing each aspect of care. Every single area of care delegated to the CDE/diabetes educator has the Practice Nurse as an alternative care provider. There is a perception now that CDEs and Practice Nurses are inter-changeable.

Many general practices have Practice Nurses running diabetes clinics where they collect the data for the annual cycle of care, provide information to people about their diabetes care and increasingly give out blood glucose meters. The nurse may also be called a diabetes educator by the practice, creating confusion for people with diabetes. It’s not uncommon for me to get a call from a person wanting to cancel their appointment because they don’t think they need to see a CDE as well as the ‘diabetes educator’ at the practice.

What we are seeing in general practice is what we saw in the early days of diabetes education. GPs realised they need the support of their nurses to provide quality diabetes care, like their Endocrinologist colleagues did back in the day when diabetes educators first appeared. Practice nurses are providing information and resources now but before long will they start to realise simply giving people printed handouts and information about diabetes care or a blood glucose monitor to check blood glucose levels does not automatically improve diabetes management? Will they soon seek to broaden their knowledge and skills in patient education, positive behaviour change, empowerment strategies and counselling to better support people with diabetes?

Oh … but wait … isn’t that what CDEs have done over the past 35 years of their role evolution? Are we simply reinventing the evolution of a new group of health professionals as diabetes educators while ignoring the skilled workforce ready and waiting for referrals?

If Australia’s GPs embrace the role of the CDE in achieving quality primary diabetes care outcomes we will see more people with diabetes referred to a CDE at diagnosis and 1-2 appointments allocated each subsequent year. This would help to address the clinical inertia that leaves people with hyperglycaemia for longer than they should because GPs would have a member of their team who is confident in diabetes care and insulin management. This would trigger more CDEs to set-up practices to accept referrals from Medicare to grow the workforce in primary care and free-up other positions for more CDEs to be trained.

Medical educators would do well to include more information about the role of the CDE in diabetes focussed medical education and how this is different to the Practice Nurse’s role and skillset. CDEs often provide suggestions to GPs about possible medication or dosing options to consider to support positive prescribing practices by GPs. This additional support could facilitate an increase in the confidence levels of GP prescribing and titration of diabetes tablets, insulin and non-insulin injectables and thereby shorten periods of clinical inertia.

A study by Blanco et al. in 2013 showed nearly two thirds of people with diabetes have lipohypertrophy.[6]  CDEs provide education to prevent this complication of poor injection technique and evaluate injections sites to screen for and identify any lumps and bumps. Could the low CDE referral rate be partly responsible for the high incidence of such problems which further impact on the non-achievement of longer term glycaemic targets? Again with more people referred to a CDE those people using older insulins and 12mm needles can be reviewed and updated to prevent altered insulin absorption profiles when injecting into areas of lipohypertrophy. The little things can make a big difference to glycaemic outcomes.

Taking the elephant from the room and increasing GP referrals to CDEs will support increased confidence in diabetes management by GPs and a comprehensive approach to diabetes self-management by people with diabetes. Then watch the number of people achieving their long term glycaemic targets increase.